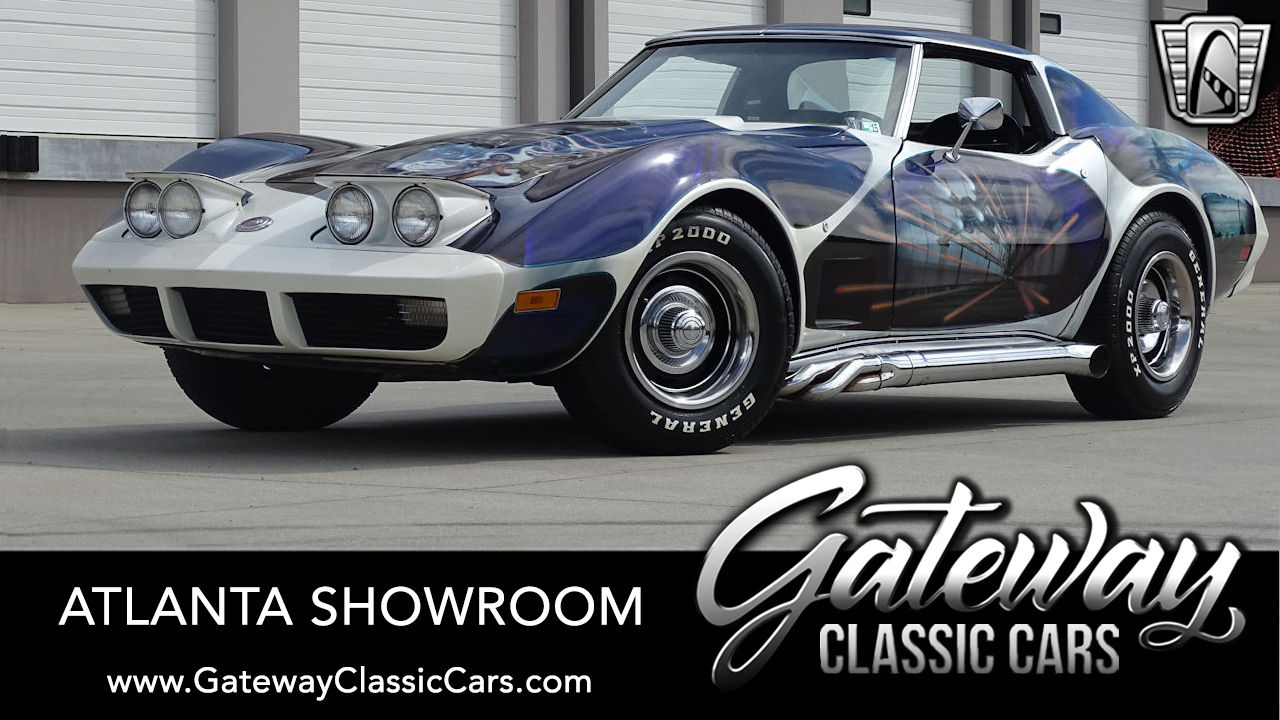 Gateway Classic Cars of Atlanta is proud to offer for sale for the first time since 2015 this one of a kind 1974 Chevrolet Corvette Stingray. This is the well-known Star Wars Vette from years ago. It has a brand-new summit 383 Stroker crate engine with a 4-Speed Manual gear box. The car has 29352 miles showing on the Odometer. Now that said go over this amazing work of art.

Back in 1977, a young filmmaker named George Lucas changed pop culture forever with the release of the first Star Wars movie. That film not only ushered in cool special effects, it set the standard (in the immortal words of Spaceball's Mel Brooks) for movie merchandising and soon Star Wars branded toys and accessories were everywhere.

Obviously, the first Star Wars movie made an impact on the world, former owner, and creator of this special 1974 Corvette. The car showcases many scenes from the movie with hand airbrushed murals painted on every body panel.

The Corvette's body panels were hand airbrushed by the renown Uniontown, PA resident Rusty Fecek who spent over 1,000 hours on the car. The Corvette features 20 coats of hand-rubbed lacquer and the richly covered murals have held up well over the last 35 years.

Rusty showed the car back in the day (see the newspaper article attached) and it earned awards and praise where he went with it. After he passed away, the car went to his daughter's garage where it was stored for 12-15 years before changing hands again.

The autobody repairman combined his art and body work talents to create the car that features purple and silver as the primary showing colors and red, blue, and yellow tones. Rusty estimates that there is around 80 coats of paint on this master piece. The paint job alone was estimated at $10,000 in 1977. Rusty won several awards with the car including first in his class, most popular car with 90% average, and most outstanding use of color and paint. Rusty's Life was lived from March 8, 1944 - November 28, 2017. He died at the age of 73. He left behind this masterpiece to show his passion for Art and automobiles.

This 1974 Chevrolet Corvette Star Wars creation is for sale by our Atlanta Showroom and can be seen in greater detail including 100+ HD pictures and video. please visit GatewayClassicCars.com. For more information or to schedule an appointment to view this vehicle in person, please call the Atlanta showroom at (678) 894-4833 or email us directly at Atlanta@GatewayClassicCars.com.

This vehicle has been viewed 4,366 times