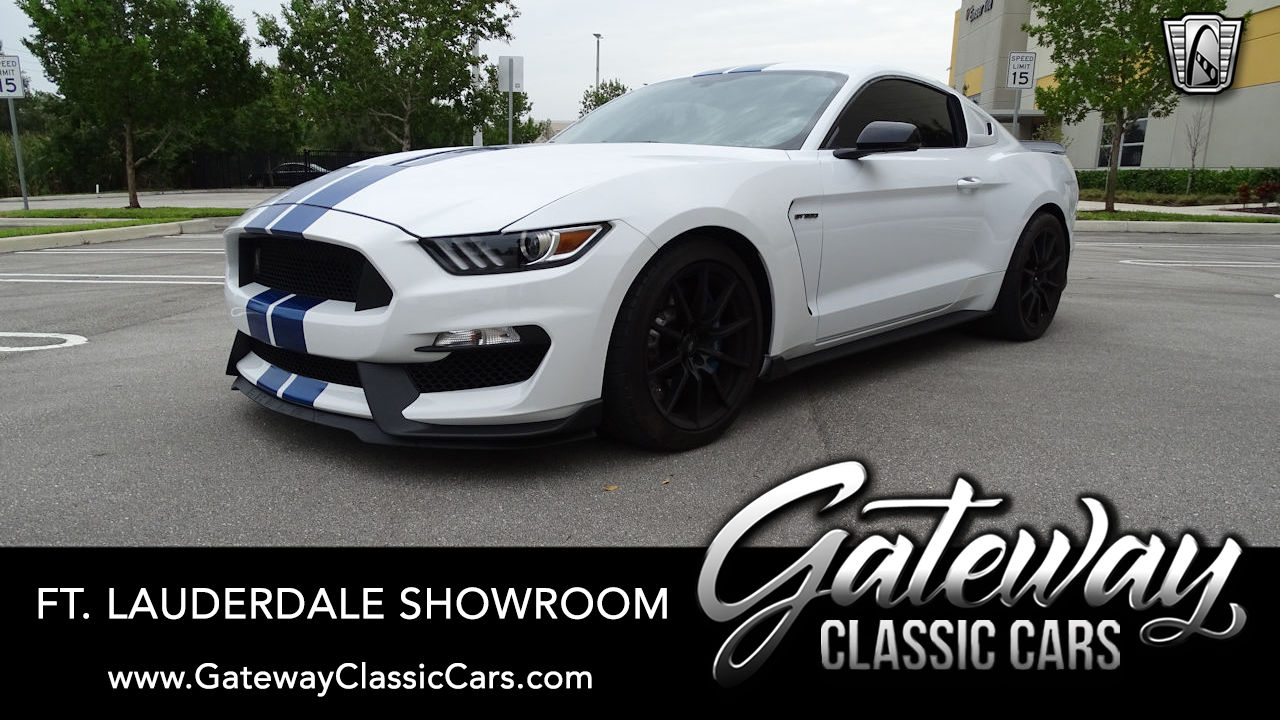 It's not that often that we get to experience that 'new car smell' here in our showroom, after all, brand new cars don't exactly put the 'classic' in Gateway Classic Cars FTL. But every once in a while, a late-model car comes along that's so darn impressive it's an instant classic. This 2017 Ford Mustang Shelby GT350 is a car built from that very mold, dressed to impress and packing a special 5.2L V8 motor (aka the Voodoo V8) augmented with a Whipple Supercharger. Wearing traditional Shelby rockstar colors and showing only 5400 miles on the clock, it's about as new as you can get in a 'used' car, which means whoever buys this Pony next can be the first to really break it in.

The Classic White paint draped over the updated 6th generation design of this stunning GT350 has an unbelievable shine, and as you'd likely expect from a car that's logged 5k very careful miles, it's looking incredibly sharp. The gorgeous finish really speaks for itself, with an unparalleled depth and luster only found on high-end modern cars, and it's further punctuated by the classic Shelby stripes down the middle and the updated C-stripes at the profiles. You also get an aggressive front fascia that features a grille akin to the GT350R with fewer openings (and therefore less drag), a vented hood, and a front chin spoiler/splitter that continues into ground effects that encircle the car and incorporates the rear diffuser - adding a dark contrast to the white paint. Outback, that rear diffuser houses twin pipes at each side, and atop the deck lid is a subtle rear spoiler that helps with downforce without adding any drag. So yeah, every nook and cranny of this Mustang was designed to make it go fast. But they did such a good job, it looks like it's going 150 MPH just standing still.

While this GT350 may sport a color scheme and power reminiscent of Shelby's early 427 creations, its black leather-and-suede interior offers a sharp, upscale appearance and all the features you'd want for everyday driving. Having seen so little use, it looks pretty much as it did when this Mustang emerged from the Shelby showroom. With the Shelby Exclusive Trim Package, the contrasting white stitching against black leather-and-suede surfaces gives the seating a great look and both the front buckets and sculpted rear seats are still at their best. Unlike its track-bound counterparts, there is plenty of comfort and convenience on hand here, including power locks, windows, heated/cooled power seats, cruise control, dual-zone air conditioning, a backup camera, voice-activated navigation, driver and passenger-side airbags, and an anti-theft device to help ensure this outstanding ride never leaves your possession. An Alcantara-wrapped steering wheel puts several controls at your fingertips, the sporty short-shifter practically begs for you to bang through the 6-speed gears, and the bespoke plaques on the dash proudly boast the car's Shelby production number, along with the signatures of the professionals behind the build. This Shelby comes equipped with the very expensive Technology Package, which means you also get a Sync 3 touchscreen multi-media center in the dash that offers both iPod and Bluetooth connectivity pumping tunes and voice navigation through the high-end speakers throughout the cabin. Plush carpet and Shelby floor mats are fresh as can be, same with the headliner, door panels, and fold-down rear seats, and the car still has that 'new-car smell to it, which is pretty amazing after 5 years on the road. Outback, the trunk is modestly sized, but there's plenty of room to account for most travel plans.

Modern-day Mustang GTs offer a generous amount of horsepower in their original configuration, but the enhanced 5.2L 'Voodoo' V8 holding court under the hood here occupies an entirely different world. Armed with all of Ford Performance's best goodies, this aluminum block is good for an otherworldly 526 horsepower (at the wheels!), and that's even BEFORE you account for the Whipple Supercharger that was added by the previous owner. Of course, all that exhilarating power would be of far less use if preparations weren't made to handle it properly, but that detail has been looked after here. A 6-speed manual transmission and heavy-duty clutch sit behind the engine, while a custom damping system, MacPherson struts, an independent rear suspension, and dual stabilizer bars are just a small sample of the long list of options the sport suspension shows off underneath. The rear end not only features a 3.73 ratio that's ideal to take advantage of the 6-speed manual transmission's capabilities but also fortified Torsen axles rated for even more power than what's on hand here. A safety loop surrounds the 4" aluminum driveshaft as an added precaution, and the stainless-steel exhaust system sounds absolutely wicked. Four-wheel disc brakes that feature massive Brembo rotors bring quick, low effort stops as this ultra-powerful Pony smokes the asphalt on its set of 19-inch Shelby GT350 alloy wheels outfitted with Michelin performance tires.

This 1-owner, low-mileage 2017 Ford Mustang Shelby GT350 offers the chance to own an ultra-lightly used and superbly fortified version of Ford's modern-day muscle car. Call today! This GT350 is for sale through our Fort Lauderdale showroom and can be seen in greater detail including 100+ HD pictures and a HD video at www.gatewayclassiccars.com for more information please call the showroom at 954-227-4202 or email us at fortlauderdale@gatewayclassiccars.com

This vehicle has been viewed 775 times 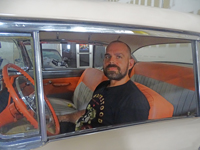 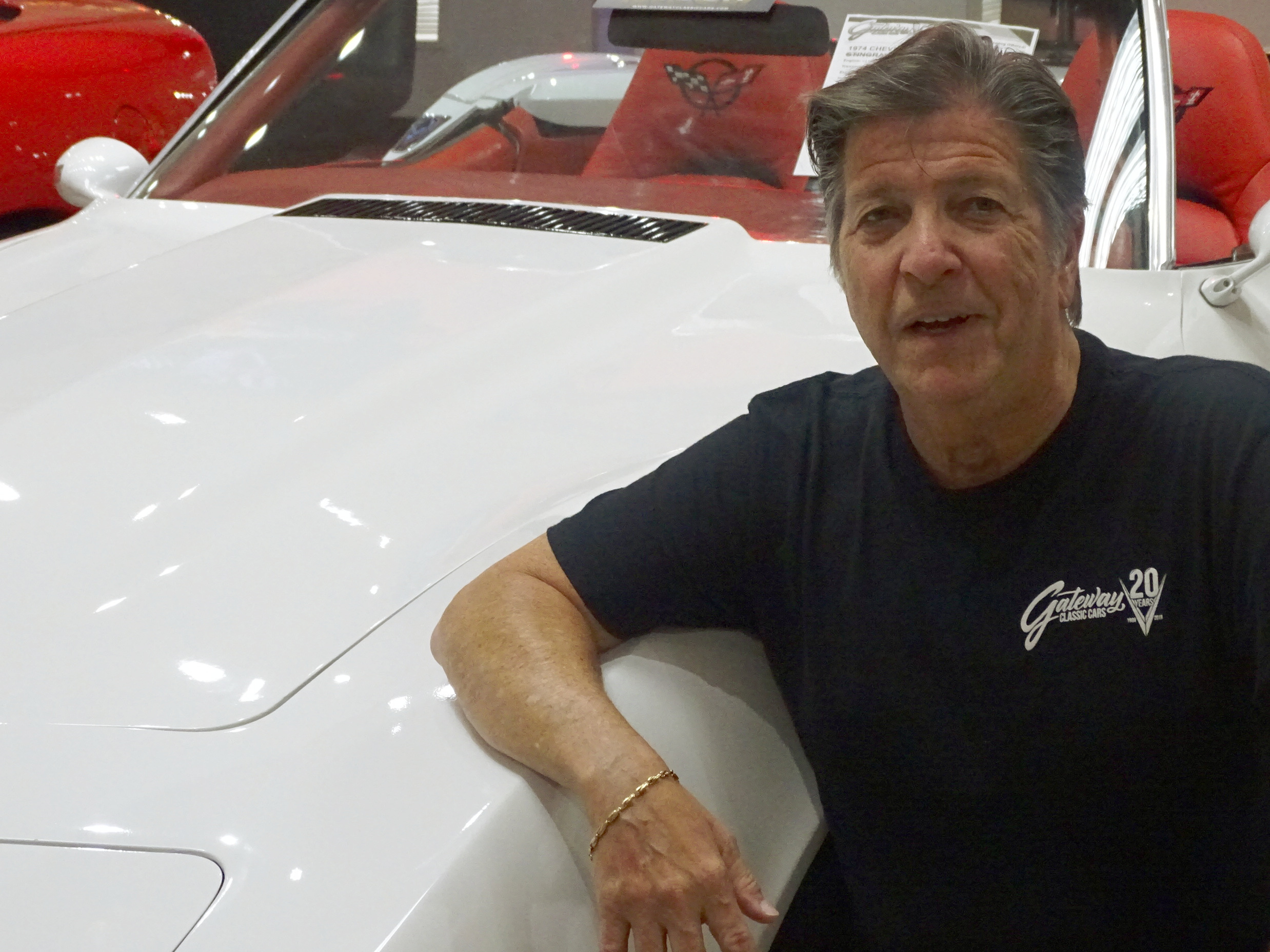