Ladies and Gentlemen, Gateway Classic Cars of Kansas City is awestruck to offer a gorgeous 1956 Chevrolet 210 that appears to be dipped in beautiful Candy Brandy wine paint!

The Chevrolet Two-Ten, or 210, was the midrange model of the Chevrolet car from 1953 to 1957. It took its name by shortening the production series number (2100) by one digit in order to capitalize on the 1950s trend toward numerical auto names. The numerical designation '"210"' was also sporadically used in company literature. It replaced the Styleline DeLuxe model available in previous years. The Two-Ten was discontinued after the 1957 model year to be replaced by the Biscayne. As the American public began to prefer posh to economy, the Bel Air began to outsell the lesser series, including both 150 and 210 models. As a partial answer to this, Chevrolet re-introduced the Two-Ten Sport Coupe hardtop in the middle of the 1955 model year, and also added a four-door Two-Ten hardtop Sport Sedan for 1956. Neither achieved the sales of their Bel Air counterparts, however, since they were only about $100.00 cheaper than the Bel Airs, which provided more luxury and premium exterior trim.

Unlike the 150 series, Two-Tens were always available with the same luxury options as the Bel Air, including the Powerglide automatic transmission, power window lifts and seat adjuster. The Two-Ten Townsman was the top station wagon model offered in 1953, but the Townsman was moved up to the Bel Air series for 1954, only to return to the Two-Ten for 1955. The lower-priced Handyman station wagon, a four-door model in 1953–54, became a two-door for 1955–57. Both were joined by a nine-passenger Beauville four-door wagon in 1956–57.

Our 1956 stunner not only looks good due to the Brandy Wine exterior and black interior, she’s also a performer because of the 383, Chevrolet, fire-breathing V-8, that is wedged between the fenders! The only thing missing from this combination of awesome looks, sound, and performance is a flashing neon sign bolted to the roof stating “Look at Me!”. Hard to miss this one! And, while you are getting lots of thumbs-up and meeting many new friends with this conversation starter, you’ll also be pampered while cruising with creature comforts such as, air conditioning, am/fm stereo cassette, power brakes, power steering, cloth interior and more!

This Brandy Wine colored piece of Americana looks great next to our other awesome tri-five machines in our KC inventory, however, we are not going to plan for a long stay at our facility with this one. Too much eyeball, performance and at a great price! To even have a shot at this one, you must begin your purchasing journey by calling our KC hotline at(913) 815-1340, or to view this beauty in greater detail including 100+ HD pictures @ gatewayclassiccars.com, and choose the Kansas City Showroom.

This vehicle has been viewed 5,844 times 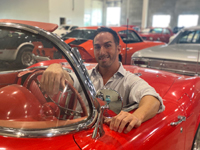