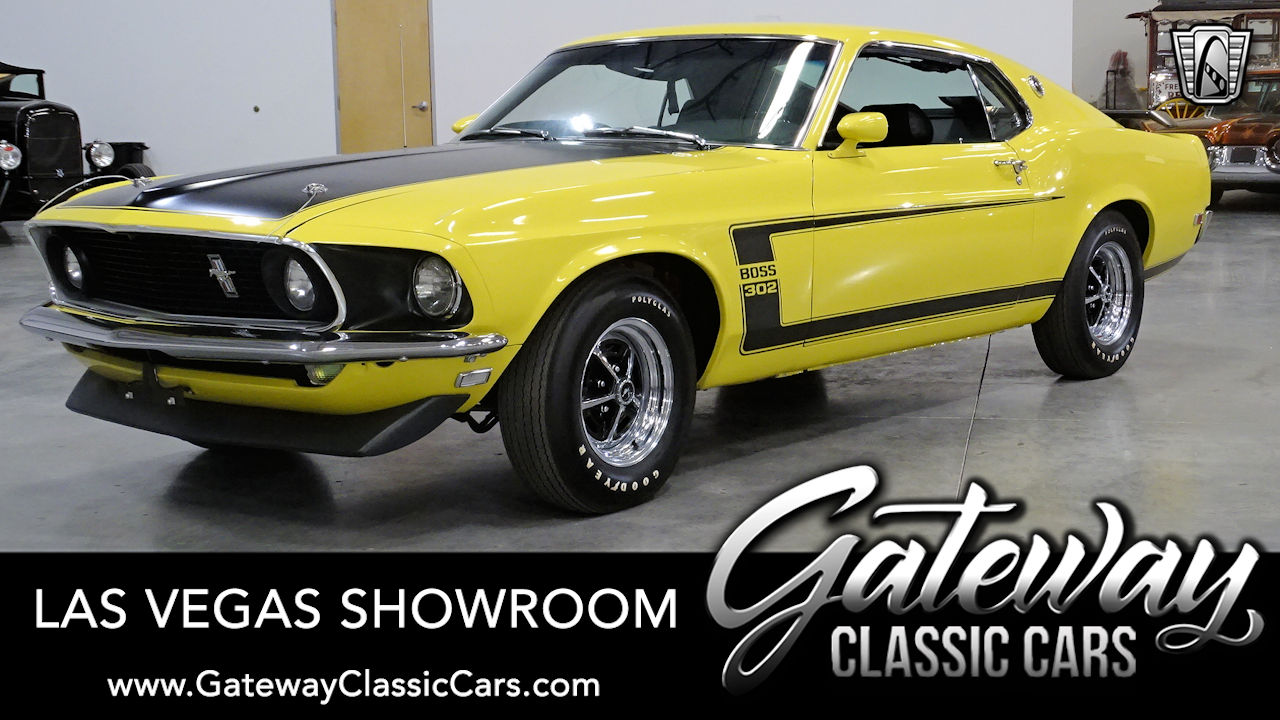 Gateway Classic Cars is thrilled to present a 1969 Ford Mustang Boss 302 to our Las Vegas showroom!

“Win on Sunday, sell on Monday" was the old adage in the 1960s. When Chevrolet introduced the Camaro Z/28 in 1967 To compete with the Mustang in the showrooms and on the streets, winning the Trans-AM Racing Series championship in 1968, Ford knew it had to step up its game. Former GM designer Larry Shinoda, now working at Ford, became the man responsible for the unique styling and the name that would help lead the iconic Boss 302 into infamy. Although Ford did not win the series in 1969, the Boss 302 - with Bud Moore team and drivers Parnelli Jones and George Follmer - made it into the history books with a Trans-Am championship in 1970.

Purchased from the original owner in 2000, this striking 1969 Ford Mustang Boss 302 has been finished in its factory-ordered Bright Yellow and is accented nicely with brightwork, black matte hood, front and rear spoilers, and a C-stripe on the side of the car. It retains its original 302ci, 290hp V8 that pushed the car from 0 to 60 in less than 7 seconds back in the day, it shifts gears with its original 4-speed transmission. Although these cars were not typically high-option cars, this example is equipped with power front disk brakes and an adjustable rear spoiler with the 3.50 rear axle ratio. Other details on the Sportsroof-designed Mustang are its chrome Magnum 500 wheels with wide oval belted tires, a special handling suspension and cooling package, functional front spoiler and space-saver tire, including jack.

Blue-chip collectible cars like this with history and authenticity are rare to find. This one combines both, including documentation and pictures in a binder, an options verification letter from Ford, Marti Report, original window sticker, original Build Sheet, copy of title from the original owner, original owner's manuals and other miscellaneous documentation. Ultimately, the next owner of this increasingly popular and high-demand Ford muscle car gets a chance to drive the Boss of the road.

It can be seen in greater detail including 100+ HD pictures and a HD video at https://www.gatewayclassiccars.com/LVS/424/1969-Ford-Mustang-Boss-302. For additional information please call our sales staff at (702)830-9215 or email us at Lasvegas@GatewayClassicCars.com. Our Las Vegas Showroom located at: 6580 S. Lindell Road Suite 300 Las Vegas, NV 89118.

This vehicle has been viewed 9,971 times